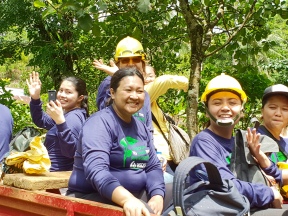 7 June 2019, Sierra Madre Mountains, Siniloan, Laguna. There is only one company that has planted with FEED as often as 12 times, and it is Aspen Philippines, Inc.  “Aspen has a proud heritage dating back more than 160 years. The Group is committed to sustaining life and promoting healthcare through increasing access to its high quality, effective, affordable medicines and products.” (Source: https://www.aspen.ph/about/corporate-overview/)

ASPENites clearly have a special kind of connection with nature. Ms. Ace “Marcelina” Itchon, Aspen Philippines, Inc. Chairman & President (also a FEED Ambassador) and her team of EcoWarriors invest in securing the future of our environment for generations to come by planting trees every year, not only in upland reforestation projects for water security & storm defence, but also in coastal areas for flood protection and livelihood development; they also focus on food security of our fellowman by teaching them how to produce their own organic food through FEED’s respective Mangrove Rehabilitation & Food Forests program.

Aspen’s 11 employees trekked the lush Sierra Madre mountains several times in the last 3 years, clearly loving and enjoying the greenery, as they are measurably healthier and happier every time they return.  Aspen’s Eco-Warriors are regularly exposed to nature as a means to help them to reduce stress in our fast-paced world and to give back in community service.

Once planting was completed the group trekked back up through the bamboo forest to base camp, where they enjoyed a native binalot chicken adobo meal wrapped in banana leaves, with rice, bananas, tomatoes and water as it got very hot towards completing of planting the 800 trees by 1030AM.

Guests of FEED, part of the Students and Volunteers for the Environment (SAVE) – visitors from Peru who have moved to the Philippines to live here – Samanta Brandon and Richard Chikhani – also joined in the planting to add their own 5 trees each to the Sierra Madres. Thank you all!!

Planting trees contributes to increased public awareness on the importance of restoration of forests and the preservation of our biodiverse ecosystem, priceless national treasures that contribute to our water security, food security and storm defence mechanisms as part of our consolidated climate change mitigation efforts. ASPEN Philippines Eco-Warriors are True Nature Keepers!

“Forests are vital to life on earth. They are the richest of all ecosystems – covering only 8% of the planet and are home to two thirds of all known species of terrestrial plants and animals. Millions of people rely directly on forests for food, water, medicines and other basic materials. For these forest peoples the forest defines their culture and way of life. Within developing countries, one billion of the world’s poorest people depend upon forests for part of their livelihoods, and as many as 350 million people living in and around forests are heavily dependent on forests for their livelihoods and security.” -Greenpeace

The Philippines is one of the most severely deforested countries in the tropics and most deforestation has happened in the last 40 years. Estimates place forest cover in the Philippines in the year 1900 at 21 million hectares, covering 70 % of the total land area…

Biodiversity and Protected Areas: Philippines has some 1196 known species of amphibians, birds, mammals and reptiles according to figures from the World Conservation Monitoring Centre. Of these, 45.8% are endemic, meaning they exist in no other country, and 14.7% are threatened. Philippines is home to at least 8931 species of vascular plants, of which 39.2% are endemic. 5.1% of Philippines is protected under IUCN categories I-V.

Sierra Madre: Under Threat – A close look at illegal logging in one of the Philippines’ last remaining old growth forests*

Though published back in April 2006, much of the fact based findings in this report still prove relevant today.

“In 1992,the Philippine Government proclaimed 287,861 hectares of land area and 76,625 hectares of coastline water area of the Northern Sierra Madre Mountain Range (“Sierra Madre”) as part of a national integrated protected area system. Through the enactment of Republic Act 9125, the Sierra Madre was declared a natural park to further enhance its protected areas status.

Republic Act 9125 also provided the Sierra Madre an extra layer of protection (called the “buffer zones” covering adjacent areas one (1) kilometer wide from the boundaries of the Sierra Madre) to which restrictions and sustainable resource management strategies involving local communities and the private sector are similarly applied in order to repel threats to the protected area.

The law further declares that all primary (old growth) forests within the Sierra Madre including portions which have been previously declared as alienable and disposable, shall be classified as strict protection zones and shall be free from all forms of logging or exploitation, commercial or otherwise; except portions of primary forests which may be classified as sustainable use zones. Under the law, “sustainable use” is defined as— “the use of components of biological diversity in a way and at a rate that does not lead to the decline of the species used and not causing permanent or long-term diminishment or qualitative degradation of biological species, ecological functions or of other resources extracted or disturbed, thereby maintaining its potential to meet the needs and aspirations of the present and future Filipino generations”.

The law also enumerates the illegal acts within the Sierra Madre and the buffer zones. The illegal acts relating specifically to forest protection are:

Despite the proclamation of the Sierra Madre as a protected area, there have been persistent reports or information that illegal logging activities continue to be conducted within the area….

It can be inferred that the wood furniture industry contributes to the continuing illegal logging in the Sierra Madre. Even so, the government will surely hesitate deprioritizing the wood industry sector due to economic importance. This is understandable, however, it will help to bear in mind that the country’s state of deforestation and loss of biodiversity have reached crisis proportions and for that matter hard choices have to be made. Ecological disasters, like landslides killing thousands at a time, and the growing threat to water quality and supply attributable to deforestation are harsh realities that can no longer be ignored. Indeed, for the Philippines, saving what is left of its forest cover has become a matter of survival.”

Aspen Philippines Incorporated is the first South African pharmaceutical company in the Philippines. It started operating in January 2012 with only a handful of employees. But after a few months, it has rapidly increased to over 100 passionate Filipino staff.

With the company’s immediate and continued growth, its commitment becomes stronger. That is to meet the healthcare needs of Filipinos by providing a broad spectrum of high quality, effective, and affordable pharmaceutical products so that ultimately, lives can be sustained one day at a time.

Aspen Philippines’ range of products initially comprises of antibiotic, anti-hypertension, anti-gout, anti-platelet and anti-hypothyroidism. But the company continues to expand its reach, acquiring global brands in consumer healthcare, which include Dequadin, Kwell, and Valda Pastilles.

Now that Aspen has made its mark in the Philippines, Filipinos can now take advantage of an improved means to healthcare right at their fingertips.

FEED runs a number of Students and Volunteers for the Environment (SAVE); Corporate Social Responsibility (CSR) – such as mangrove planting for coastal protection or ridge reforestation plantings; One Child, One Tree; Bio-Intensive Gardens (BIG) for nutrition in public elementary schools and other spaces; Climate Change Survival 101 and other LIVING LEGACY programs – customised environmental engagement activities for individuals and organisations interested in contributing to climate change adaptation efforts and greening critical areas such as watersheds, ridges, and reefs that all require rehabilitation.

Check out the video journey by Clueless Commuter who planted with us last 24th of June 2017 to get a good idea of how FEED plantings go: https://youtu.be/KROn4rjVqBg