Siniloan, Quezon, 29 September 2015. The Philippines is blessed with a vast array of diverse organisms. In fact, the country is considered as one of the most biologically diverse countries in the world. Which is of no surprise, with 7,107 islands, there could be countless endemic species waiting to be discovered. However, despite the country’s rich biodiversity, the land that provides life for its inhabitants is gradually dwindling. Thus, various organizations such as FEED, University of the Philippines Los Baños (UPLB) and their Land Grant Management Office (LGMO), the Philippine Army (PA) and the UPLB Microbiological Society (MicroSoc) commit themselves to helping mitigate this destruction.

The MicroSoc tree-planters were given Certificates of Appreciation in thanks to their having spent their weekend time planting trees (rather than at the malls):

Fostering Education & Environment for Development, Inc. (FEED) is a non-stock, non-profit and non-governmental organization that aims to preserve and protect Philippine biodiversity through educational programs and joint activities. FEED teamed up with MicroSoc to plant trees in Laguna-Quezon Land Grant upon the invitation of Professor Emeritus Asuncion K. Raymundo on behalf of FEED. Under the advocacy of the “Living Legacy: Plant a Tree, FEED the Future” program, Students & Volunteers for the Environment (SAVE) – through FEED, undertakes this project in collaboration with UPLB – specifically, the LGMO headed by Forester Benjamin Arizala and LGLQ Field Manager Forester Reynaldo Lorida – and the Philippine Army. 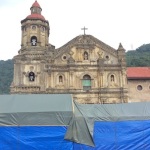 Numerous tree-planting activities had been organized since 2012 and last 26 September 2015, it was MicroSoc’s turn to give back to Mother Earth. A seminar was conducted first by For. Arizala to provide the student volunteers substantial information regarding the tree-planting session. It was noted that Laguna-Quezon Land Grant has a total area of 5,729 hectares in which it is a valuable shelter for many species. Aside from its ecological contribution, the area has been a subject for income generating ventures hence intensifying the need for its reforestation and maintenance.

A total of 1,000 seedlings were planted on site. MicroSoc affiliates along with two prime UP Ecology and Systematics Major Students Society (ECOSS) members enthusiastically planted Narra, Agoho, Malaruha and other indigenous seedlings. The PA’s 2nd Infantry Division also sent a number of their “Jungle Fighter” division troops who provided assistance and protection for the student volunteers during the activity. The PA contingent consisted of 15 soldiers from E coy 59 1B 2 ID led by Sgt. Adan Q. Adan, 7 from 2 O 2 Brigade led by 2nd Lieut Ivy Arban and 6 from the First Infantry Battalion led by Cpl. Marco Garvez.

After planting, a short trek around the planting site was conducted by the PA. At that moment, the group appreciated the diversity of the protected area. Trees were looming everywhere and the breeze of air was invigorating. The trek took all of the energy from the students but having seen all that nature has provided, the students said:

“the experience made our spirits burn brighter. The need for a greener future was indeed strengthened”.

Altogether, FEED, UPLB’s LGMO, UPLB volunteers and Jungle Fighters successfully sowed a greener and better future for the Sierra Madres. Hopefully this living legacy continues and more student organizations will participate in its cause. Let us save the environment in order to save ourselves. Let us plant trees now.